In the past years, violence and instability have rapidly increased in the West African Region. Burkina Faso, previously a long-term beacon of stability and social cohesion in the region, is facing escalating conflict especially in the border areas towards Niger and Mali, yet also – still scattered – at its Benin border. The Armed Conflict Location & Event Data Project (ACLED) found that since 2016, the number of violent attacks in Burkina Faso, Mali, and Niger has grown five-fold, leaving in its wake more than 4,000 casualties. Current hotspots of violence are the regions Mopti (Mali) and Sahel (Burkina Faso), who each saw above 500 conflict-related casualties in 2019.

Several militant groups are challenging the states’ authority in an area that is difficult to control. Most of the groups uphold radical Islamic fundamentalism and seek to exploit latent conflicts among the populations’ different ethnicities. A lack of both basic services and public infrastructure make it easier for militant groups to fill the vacuum and terrorise the local population which often lacks any means of protection.

Structural challenges faced by the population nourish the emergence and growth of militant groups. Factors such as resource scarcity, widespread poverty, weak governance and ineffective decentralisation, as well as growing numbers of internally displaced people (IDPs) and the prevailing of ethnic identities over a sense of common nationality all contribute to the complex dynamics of a conflict that is rapidly becoming more brutal.

In view of this dramatic situation, the project sectors covered by the PATRIP Foundation seek to address communities’ peace and security needs in a meaningful way. PATRIP-financed projects in West Africa are largely multi-sectoral as well as highly participatory in nature and center on cross-border promotion of dialogue and conflict resolution, legitimate governance and social cohesion. They involve as many relevant stakeholders of a community as possible, in order to identify most pressing needs and provide vital infrastructure such as housing and community halls. Many of the projects have a focus on particularly improving the perspectives of youth, as this group remains a primary target for recruitment by radical groups.

Despite efforts to achieve a US peace agreement with the Afghan Taliban in 2019, violence continued in nearly all provinces of the country, claiming over 40,000 casualties. Among this heavy toll are many civilians, who are exposed to violent clashes between the Taliban, other militias and rebel groups, as well as the government’s response. While the Islamic State of Khorasan (IS-K) has been nearly diminished in the border province of Nangarhar after having been battled for years by not only US and Afghan, but also by Taliban forces, the conflict between the Taliban and US troops intensified in the context of the peace negotiations as well as the presidential election in the second half of 2019.

Multiple factors contribute to the general instability faced by Afghanistan, which also affects the border areas of the surrounding countries. Overall, the contestation of state legitimacy by the Taliban and other groups creates a highly instable context, in which communities suffer from quick shifts in governance and conflict dynamics. Moreover, widespread poverty and lack of perspective for youth provides a potent breeding ground for radicalisation. The level of poverty is related to the scarcity of fertile land for agriculture and livestock, which in turn represents a major driver for conflict regarding the access, control, and distribution of resources along ethnic, political, and religious lines. These conflicts are not limited to Afghanistan but are a reality for Pakistani and Tajik communities as well.

PATRIP is active in the Afghanistan-Tajikistan, Afghanistan-Pakistan, and – less so – in the Afghanistan-Iran border area. Many of the border areas in which communities live are rather remote and difficult to access, which means that state activity is low, and many public services are not being offered. In Pakistani, Tajik and Afghan communities, this happens in a context in which state legitimacy and public trust are already severely challenged by corruption and power struggles among influential stakeholders. The result is an overwhelming feeling of insecurity among many communities, who are trying to survive in a struggling economy while battling challenges of isolation.

To address these challenges and conflicts, PATRIP-supported projects in this region range from improving routes for transportation by building roads and bridges, providing access to electricity as well as to vital health services and education, or to the de-mining of territory, which can then be used for agricultural and other purposes. In order to address the often stark gender inequalities, several of PATRIP’s projects focus on providing women with new skills and opportunities for more economic and social independence. 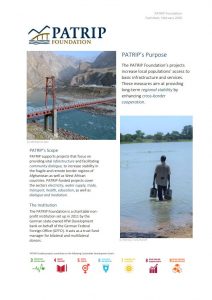 PATRIP Foundation is a non-profit organisation that channels multi-donor funds into cross-border projects aimed at increased stability and integration in fragile regions such as in Afghanistan or the Sahel.